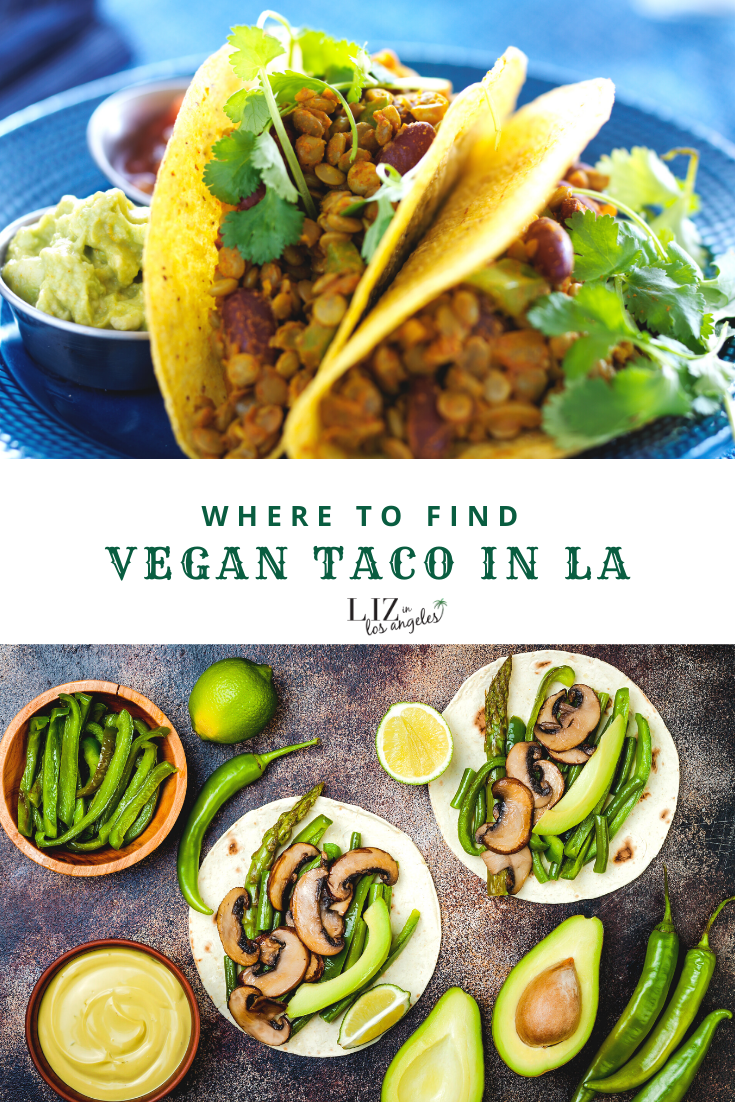 If you’re vegan, you know you will not have that many vegan options at most Mexican restaurants. Since “real” or “authentic” Mexican food is made with pork usually. Luckily, there are tons of vegan options in LA. So, Where to find vegan tacos in Los Angeles?

Where to Find Vegan Tacos in Los Angeles

You would expect Trejo’s Tacos to have vegan tacos but it does! It has the most unique vegan tacos in Los Angeles. Three kinds: Cauliflower, mushroom, and jackfruit. They have somehow figured out how to make jackfruit taco look and taste like pork taco. are unconventional, maybe even a little risky. But what else did you expect from L.A.’s favorite movie bad guy, Danny Trejo?

Since Pink Taco is located on the Sunset Strip, it’s very trendy and rock ‘n’ roll. The founder of Pink Taco was the grandson of Morton’s steakhouse co-founder and son of Hard Rock Cafe co-founder. So, he grew up around the food business and rock. They serve traditional tacos as well as the best vegan taco.

Tocaya Organica started out in Venice but it’s pretty much like a modern Mexican chain. Most people think Tocaya is a vegan restaurant but it’s natural and sustainable with vegan options. Tocaya in Los Angeles has 4 types of vegan tacos, which are all gluten-free.

Gracias Madre is a plant-based Mexican restaurant with all vegan and organic food. You might go there for the chic scene or the cocktails but you can definitely find the best vegan tacos in Los Angeles there.

Tacos Tu Madre is best known for its creative tacos. It is an understated walk-up window and a small cafe but it has an Instaworthy mural. The tacos are so good that you’ll order two. But don’t forget that Instaworthy shot by the mural.

Real Food Daily is a plant-based restaurant that is also kosher. You might not stop at ordering just tacos since the food is so good at RFD.

Sage is all about comfort food but only locally sourced plant-based food. Large vegan menu since they got tons of variety.

Toca Madre is a posh Mexican restaurant with a vegan menu. It definitely has a scene. But if you want to avoid the scene and just try the food, go earlier. As the night goes on, Toca Madre becomes club-ish. I love Toca Madre for tacos since the menu has a variety of vegan tacos.

If you’re a vegan foodie but want to try something other than tacos, click here for the best spots for vegan ramens.

Want to know where to find the best Taco Tuesday spots in DTLA, click check out this blog post.

Where do you think are the best vegan tacos in Los Angeles? Let me know in a comment below!